The other day, I stole some time and took myself to see Finding Vivian Maier, a now-playing documentary about a stunningly talented street photographer whose body of work was discovered at an auction near the end of her life, when she had no money to pay storage fees for her lifetime of work, although she died not knowing she’d been discovered.

I smuggled a drink into the theater and splurged on popcorn. The place was nearly empty but I sat near the front so I get my nosy nose right up into the

screen and I sat there in the dark with my pupils wide and gulping, gulping. Every one of her photographs made me feel like I was seeing an iconic image for the first time.  How come I never heard of Vivian Maier before?

We’ve all heard of tremendously talented artists who live and die without money or fame. This happens every day and although those stories are important, the surprising part of Vivian Maier’s story, apart from her stupendous talent, is not that the fact that she’d been overlooked but that no one knew her— literally no one knew literally nothing. Vivian Maier (February 1, 1926 – April 21, 2009) had no real friends, no family, and not even her employers, the families who hired her as a live-in nanny for their children, knew much about her. She was more reclusive than Emily Dickenson and as much of an outsider as artist Henry Darger. Like them, Vivian Maier’s lack of recognition was so utter and so profound that it had to have been intentional.

In an age when it seems as though everyone (and their grandma, and their dog) wants to be famous, Vivian Maier is an anomaly. Today, 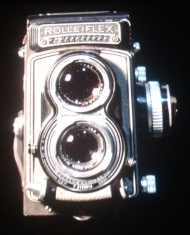 countless talentless hacks move mountains to be seen and admired. But the masterful Vivian Maier didn’t play that way. She wasn’t longing to be discovered: she wanted to hide behind her camera and actively (cleverly, boldly, rudely, maliciously) thwarted every opportunity for recognition and intimacy.

Here is a woman who wants nothing but a camera and herself. Why did she live this way? What was her motivation for hiding herself and her talent? The closest one can come to understanding is by looking at her self portraits because although all her photographs convey an ironic intimacy and an unblinking appreciation of humanity’s flaws and failings, it’s her self portraits that reveal how she pictured herself. She’s the only person who knew Vivian Maier and those self portraits, taken by her and for her eyes only, confer at least some degree of intimacy.

For such a staunchly invisible person, Vivian Maier sure took a lot of selfies.  Here are some that I found particularly compelling:

I sit in the theater alone observing this monolithic woman whose life was simultaneously empty and full, and I am overwhelmed. It disturbs, amuses, and thrills me that a person can be so focussed and so, so unseen.

Looking at her work, I understand the allure anonymity, of intimacy with strangers, fleeting insight, and seeing oneself from the outside as a small but integral part of a larger picture.  I see that art needs nobody but an artist to make it good. I feel the terror of being alone with oneself, alone to wrestle inner monsters.

Because more than anything else, Vivian Maier knew that in this life, we have only ourselves.

Take a look and tell me what you think.