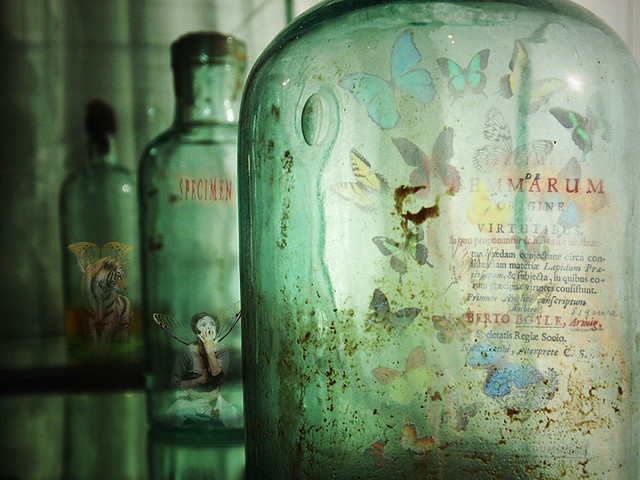 The plastic mesh container came with a coupon that read, Redeem this coupon online and we’ll send live caterpillars!  But Lola was four and couldn’t read yet so, after tearing through the pink tissue, she blinked at the empty cage and turned back toward the pile of presents.

Lola had been practicing all week, had begged her mom to wrap various objects over and over again, so by now she was quite the Houdini with the ribbon. “I’m the fastest birthday girl ever!” she yelled as she released a wand and a pair of fairy wings from their wrappings.

Her big sister Jo fished the coupon and instructions out of the cage and retreated into the den.  By the time Lola was finished opening presents, Jo had memorized every detail.  She found her mother in the kitchen.

“Mom. We have to order the butterflies. Can I use your computer and your credit card?”  She stood by the counter eyeing the cake: three graduating layers, each supporting a parade of tiny plastic cats.  “How come my cake wasn’t this big?”

Her mother, on her knees searching for candles, sighed deeply into the bottom drawer.  “I just bought these cake pans. Your next cake will be humongous.”

“I want four layers. With dragons.” In the living room, her little sister had stripped down to her underwear and was flapping her wings and touching each guest with the tip of her wand, transforming them into princesses. She skipped into the kitchen, tapped Jo and yelled, “I’m the pinkest princess, but you can be the green one. Abracadabra!”

“I don’t want to be the green one.  I don’t even want to be a stupid princess.”

“Then what do you wanna be?”

Jo ignored the question.  She stood with her arms crossed over her chest and repeated, “I want my cake to be orange and green with fire-breathing dragons, okay?”

Her mother sighed again. “Jesus, Jo. Your birthday is next month; today is Lola’s.  Can we please not talk about your birthday for just one day?”

So when they came in the mail a couple weeks later, the jarful of tiny worms, their mother was so surprised she swore and dropped the half-opened package on the floor.  Joe rushed to the rescue. “Mom, you’re going to kill them!” She scolded.  She cradled the jar in the palms of her hands and scowled at her mother. “They’re just babies.  You should really be more careful.”

So it was decided, Jo would take care of the caterpillars. Lola didn’t seem to mind. There were three of them, ugly black little things quivering in a jar half-full of food.  After a week, they had grown an inch, and two weeks later, they were as long as fingers, wriggling blindly around in the food mixed with their own excrement.  Or at least two were growing—the smallest seemed barely alive.  Jo watched and fretted.  She put them on a high shelf on the bookcase in the den, far out of Lola’s reach although Lola had forgotten all about them.

When their mother was writing on her laptop in the chair in the den, she would sometimes catch sight of the jar and remember its contents with a hot flush of guilt, but she would not succumb to the compulsion to check on them. The idea of those worms sitting on her bookshelf, just shitting and chewing, shitting and chewing silently, quietly, blindly growing, that idea was repulsive. She thought that if she didn’t look, then she wouldn’t be responsible, and if she did look, she would be morally required to feel something for those creatures.  Every time she remembered the worms, the feelings of guilt and repulsion grew along with the strength of her resolution not to get involved.

It was a relief when the two fat caterpillars finally affixed themselves to the top of their jar and grew hard casings.  Jo affixed them to the inside lid of the larger plastic mesh container. Lola was suddenly interested.

Jo told her, “You better not touch them.  They’re very delicate right now.”

“You haven’t even looked at them for a month. I’m the one who took care of them every day.”

“But they’re mine! They were for my birthday!”

Jo said it wasn’t fair, but the container was moved to a lower shelf where the chrysalises became a major household attraction.  The girls would check on them several times a day to make sure they were still dangling there like precious jewels.  One day, just in time for Jo’s birthday, the shells cracked and out climbed two perfectly formed butterflies. Slowly, their wet nubs unfurled into delicate dappled wings.

Jo, their resident expert, filled their cage with flowers, sliced fruit and little bowls of sugar water and when it was time, they took the container to the back yard.  Of course there was a fight but they finally agreed it would be fair if they each got to free one.  Jo went first.  She extracted hers by coaxing it gently onto a long stick, pulling it out into the air and waiting patiently.  Feeling the breeze for the first time, the butterfly flapped its wings thoughtfully a few times before taking her careening maiden voyage:  Lola shrieked goodbye and it flapped quickly over hedge and out of sight.

Then it was Lola’s turn.  She put on her fairy wings and poked the butterfly with her wand several times while Jo reprimanded her. When Lola tried shaking the cage, Jo snatched it from her hands. Lola erupted in tears and ran into the house.  Finally her mother coaxed her back out, and they decided to just open the cage and wait.

“She doesn’t want to leave. She wants to stay with us forever,” Lola insisted, with her nose pressed into the mesh.

Just then, the tiny butterfly burst out of the cage.  She danced toward the white anemone blossoms and flitted over the cymbidium orchids before swirling up, up, and over the house, while both girls flapped their arms and screamed, “good bye! Good bye!”

But the event was still not complete—it needed something more to complete it, so their mother turned to Jo and shook her hand.  “You make an excellent lepidopterist, my dear.”

Lepidopetrist: Jo mouthed the word as if it was a piece of hard candy.

To Lola, her mother said, “And you, you make such a lovely butterfly.”

Jo leaned down to her little sister and whispered, “Thanks for sharing.”

Their mother looked up at the sky and released the breath she had been holding.
…

But that’s not really the end of the story.  It seems that I’ve come to a point where I can’t go on unless I switch my point of view and fess up, since I am responsible for everything that happened next. Why? Obviously because I am the mother. Sure, we all forgot about the last worm growing so slowly on the top of the bookshelf, but I should have known it wasn’t going to be so easy.  Did I really think it was all going to end up like that, so neat and clean and easy?  Did you believe that for one second?

A good mother knows better.  A good mother keeps both her eyes open and both hands on the steering wheel.  If she slams on the brakes, she throws an arm across the passenger seat, even if no one is sitting there, even if her children grew up and moved out years ago, because mothering is supposed to be reflexive.  Nevermind that my oldest daughter learned to walk without my help, without falling, and she’s been slipping away from me ever since; forget about my paranoid visions of what might happen to my little one, fears that feel as clear and prophetic as a ringing bell.  A good mother has clear senses; she feeds and cleans and watches and knows and never, ever forgets.

And good writers know better, too.  Although cliché is as comforting as an old blanket and satisfying as mashed potatoes, after awhile, you just need something more.  So even though this incident with the butterflies really happened, I can’t be satisfied with the blatant symbolism of the fairy wings, the obvious correlations between children and worms, unwrapping presents and metamorphosis, or a hackneyed representation of a mother’s perfect love.  To let it end there would be a crime, a lie, a sin of omission and poor taste.

Perhaps I intentionally forgot the last worm because of a subconscious yearning for tragedy, a desire for an unexpected twist.  Maybe I knew this would make a more interesting ending. I hope not.  Anyway, one day I let the girls watch television so I could hide in the den and write.  I do this more often than I’d like to admit, even though I worry about social skills and brain development, so I yell for them to turn down the volume so I don’t have to feel so guilty.  Anyway, I was sitting there in my good chair, lost deep in some thought that had nothing to do with my children or what to cook for dinner, and I let my eyes wander up, up, up to the top of the bookshelf, where something grabbed my eye and I was overwhelmed with a flood of recognition.  It had been waiting for me all this time.  I could not avoid it any longer.

So I just picked it up and took it outside, quickly, before the girls could see.  I ran to the side of the house and tossed it into the garbage can.

I don’t want to tell you what I saw inside that jar.  I can’t put it into words.  Suffice it to say that I know now exactly what I was avoiding.  I can no longer forget what I’m pretending not to see.

I really don’t know where this came from!  I set out wanting to experiment with a short story, then it warped into some twisted gothic first person thing.  I don’t personally feel this doomed about anything at all, but the piece just went there and then felt done.   The story is based on something that really happened and I am amused to see that the part that reads like fiction is more true than the last part.